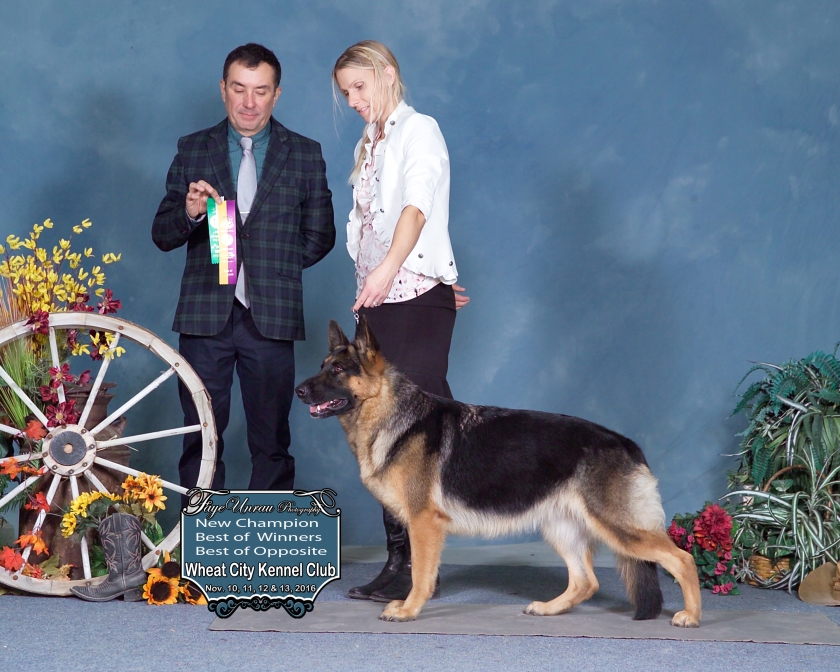 Elhart has a NEW CANADIAN CHAMPION!!
Can Ch. Elhart’s Beckett von Burg OFA H/E – “Beckett” finishing up the weekend with another major taking winners female as well as Best of Opposite over Specials!!! What a win for her final show!
Thank you so much to Judge Roberto Alvarez Marquez for noticing our girl.
This was a team effort between my daughter Racquel and I working between Beckett and Skye switching out dogs between classes to get them where they needed to be. Racquel took her in for winners (being her first time in the ring ever!!) as I was tailing behind with Ms. Skye at the end of my lead who picked up Winners Reserve as well as Best Puppy in Breed today placing over specials puppy

🙂.
What a little fire cracker Skye was at the start but settled in nicely as to what was expected of her throughout the weekend. She also picked up Winners Reserve 2nd show.
Beckett is out of our Can. Ch. Pointed Holterbren Lacey Bleu Fleisher OFA H/E – “Cassie” and V8 Figo von Buchhorn SchH2 Kkl1 a-normal.
Beckett has been breeder/owner handled to the majority of these wins but also achieved 2 with the help of Donna Bernier and Racquel Hofer.

Unauthorized use and/or duplication of this material without express and written permission from this owner is strictly prohibited.